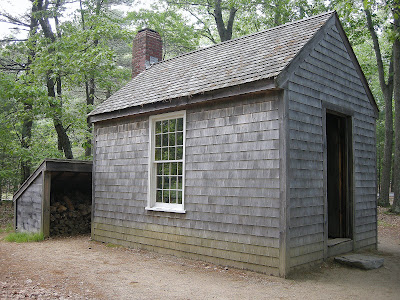 Babzy asked yesterday if I took a photo of Thoreau's house at Walden Pond in Concord, MA. The original house is gone, but this is a replica of the house he lived in, complete with a bed and table, some chairs, a stove and some cooking utensils. Pretty simple. This information is from Wikipedia, "Thoreau embarked on a two-year experiment in simple living on July 4, 1845, when he moved to a small self-built house on land owned by Ralph Waldo Emerson in a second-growth forest around the shores of Walden Pond."

"In 1854, he published Walden, or Life in the Woods, recounting the two years, two months, and two days he had spent at Walden Pond. The book compresses that time into a single calendar year, using the passage of four seasons to symbolize human development. Part memoir and part spiritual quest, Walden at first won few admirers, but today critics regard it as a classic American book that explores natural simplicity, harmony, and beauty as models for just social and cultural conditions." 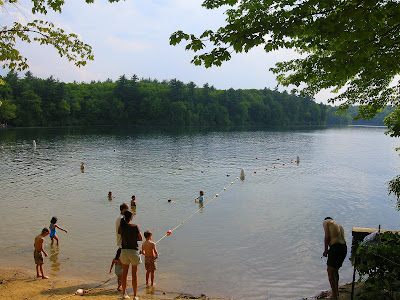 This is a picture of Walden Pond, near Concord, Massachusetts. The pond may be most well known as the inspiration for the author and philospoher Henry David Thoreau's book Walden. It was here that Thoreau spent two years in a simple cabin, where he sought self-reliance and simplicity, and wrote about his experiences. Being at the pond and seeing the replica of his house made me eager to read his book. A little simplicity in life sounds like a good thing these days! 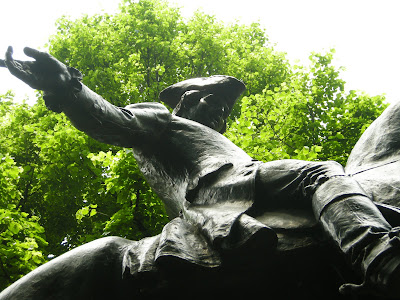 I've just spent a few very nice days in Boston, and since I've got no New York photos to show you right now, I'm just going to show a few from there. Here is the famous statue of Paul Revere heading out on his "midnight ride" to warn about the advancing British soldiers in the revolutionary war. Wikipedia says, "The role for which Revere is most remembered today was as a night-time messenger on horseback just before the battles of Lexington and Concord. His famous "Midnight Ride" occurred on the night of April 18/April 19, 1775, when he was instructed to ride from Boston to Lexington to warn John Hancock and Samuel Adams of the movements of the British Army. This statue is in front of the Old North Church in Boston's North End.
Posted by Lori at 12:00 AM 4 comments: 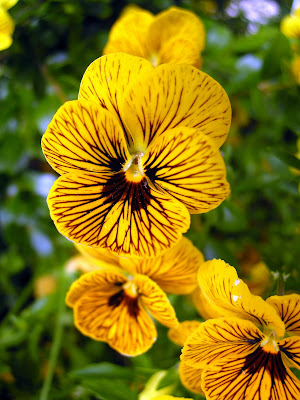 I wish you all a nice long weekend, if you are taking one. These are some pretty spring flowers from the Brooklyn Botanic Garden for this Friday post. Have a good one and see you Tuesday! 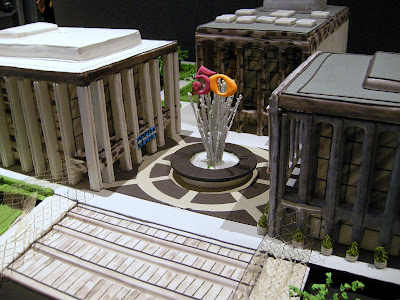 The performing arts complex Lincoln Center is celebrating its 50th anniversary this year and they just kicked off a year of celebrations. I saw this birthday cake, which was on display in one of the concert halls there. It's a replica of the real Lincoln Center (with a few parts missing of course), but it's fairly true to the real thing. That's the Metropolitan Opera in the middle, Avery Fisher Hall on the right and the David H. Koch Theater on the left. Happy Birthday Lincoln Center!
Posted by Lori at 12:00 AM 5 comments: 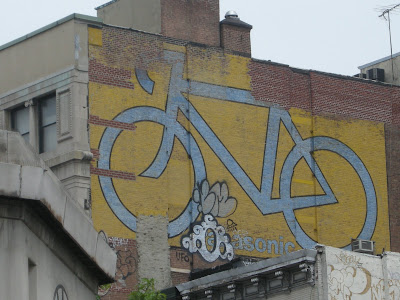 Okay, so I have no idea what to say about this one! This is just a random advertisement that caught my eye. It looks like it has been there a while. Wish I knew more to tell you! 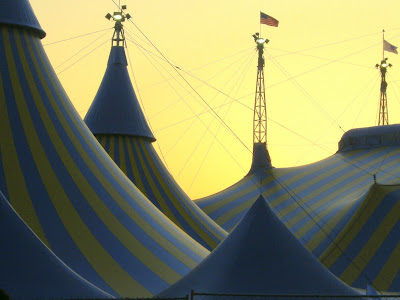 Last week I saw a great performance of Cirque du Soleil, the avant garde circus that originated in Canada. It was a terrific performance! If you ever have a chance to see their show called Kooza I'd recommend it. This is a shot of the tents before the performance. Unfortunately the sun was setting so the light wasn't great. I like the curve of the tents though. Definitely see Cirque du Soleil if they come to your city!

Give Peas a Chance 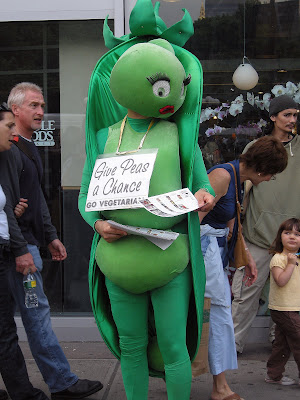 This "pea pod" was passing out flyers in front of the Whole Foods supermartket for some sort of march or demonstration. I'm not sure if he converted anyone to vegetarianism. Unfortunately I didn't get one of his flyers. He was capturing a lot of attention from passers by though. Have a great week! 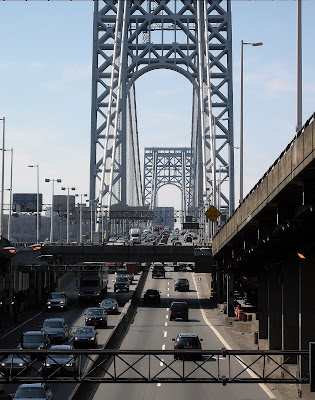 The George Washington Bridge, one of the largest suspension bridges in the country, links Manhattan with Fort Lee, NJ and goes over the Hudson River. I believe it has 14 lanes in all, with an upper and lower level and seems to always be filled with traffic. At night when it is illuminated, it is quite pretty. This photo was taken from the Manhattan side in the neighborhood of Washington Heights. Hopefully I'll find some more photos this weekend. Have a good one! 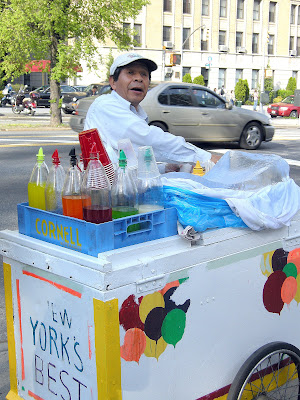 Now that it is getting a little more like summer, the snow cone sellers are starting to appear. It's so refreshing to have that icy treat on a hot day. You can see the big piece of ice that he scrapes on the right. Then he adds the flavoring and you are good to go. I wonder if his ice lasts all day. 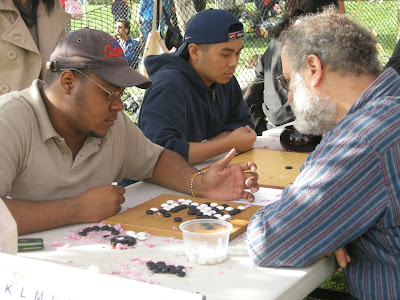 At the Cherry Blossom Festival they had a table where people were playing the board game Go. I looked it up on Wikipedia and according to them "Go is a strategic board game for two players. It is also known as igo (Japanese), weiqi (Chinese) or baduk (Korean). Go is noted for being rich in strategic complexity despite its simple rules.

The game is played by two players who alternately place black and white stones on the vacant intersections of a grid of 19×19 lines. The object of the game is to control a larger portion of the board than the opponent. Go originated in China more than 2,500 years ago, and although it is not known exactly when the game was invented, by the 3rd century BC it was already a popular pastime." 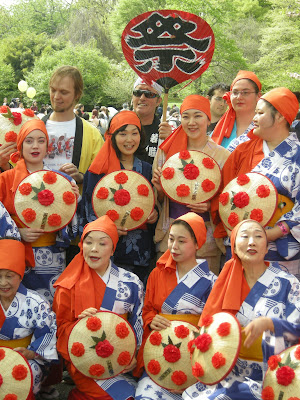 These were some of the participants in the Japanese Flower Hat Dance at the Cherry Blossom Festival at the Brooklyn Botanic Garden last weekend. I don't know the significance of the flower hat dance, but it was beautiful to watch and I believe they do it every year at the festival. It must be a rite of spring. 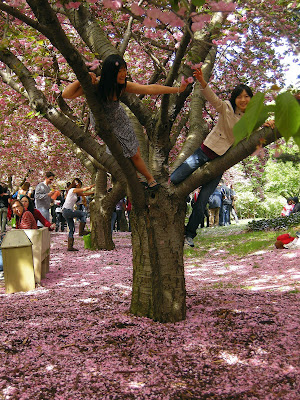 Last Saturday was a spectacular day for the Cherry Blossom Festival (Sakura Matsuri) at the Brooklyn Botanic Garden. They hold it every year but some years the blossoms are not quite ready to bloom at festival time or are just past their peak. This year they were right on time and the trees and the ground around them were covered with the beautiful pink petals. It made for some great photo opportunities, and people were even climbing into the trees for a good pose. It was a lovely day! 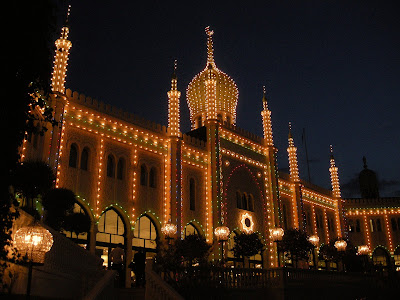 This is a photo of the Nimb restaurant and hotel in Tivoli Gardens in Copenhagen. Tivoli is a magical place and the oldest amusement park in the world (I think). It's filled with flower gardens, roller coasters, a pantomime theater, great restaurants and the world's tallest carousel, the Himmelskibet (which I rode, so fun!) I would highly recommend a visit there. There's also a concert hall with all kinds of musical performances. 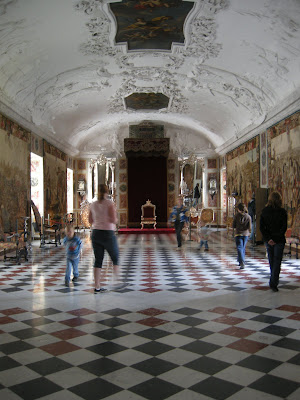 According to Frommer's, the Rosenberg Palace which I showed yesterday "houses everything from narwhal-tusked and ivory coronation chairs to Frederik VII's baby shoes -- all artifacts from the Danish royal family. Officially, its biggest draws are the dazzling crown jewels and regalia in the basement Treasury, which houses a lavishly decorated coronation saddle from 1596." This is the Knights Hall with its coronation seat and relics from the 1700s. I read that the throne you can see here is made of silver. 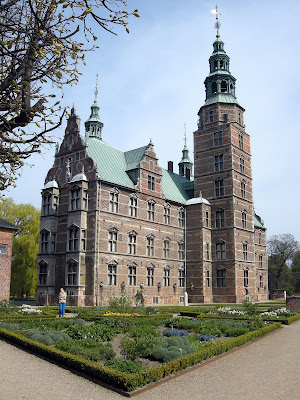 Wouldn't you like to live in a Castle like this? This is Rosenberg Palace, one of the most beautiful structures in Copenhagen and home to the Crown Jewels. Here is some info from frommers.com: Christian IV conceived of the palace in 1606 but it began with Kongens Have, the King's Garden, which still surrounds the palace today, and is one of the more delightful places in Copenhagen for a stroll. The king liked the place so much he built a summer pavilion here, which eventually led to the creation of this monumental red-brick slot (castle), inspired by the Dutch Renaissance style.
Posted by Lori at 12:00 AM 6 comments: 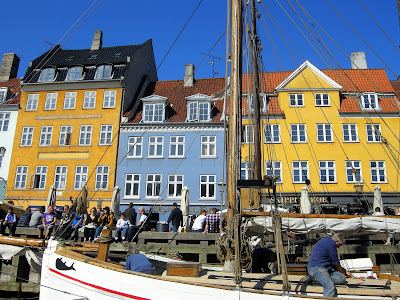 This is a photo from Ny Havn or new harbor in Danish, one of the oldest parts of Copenhagen. The Danes and tourists alike were enjoying being outside on this beautiful day, stolling along the water and spending time in the cafes. I loved the colorful buildings. Hans Christian Anderson lived along this Harbor, just a few houses down from here. Last week I was very fortunate to spend a few days in Copenhagen, Denmark. What a beautiful place!!! I'll show more over the next few days but this was one of the bicycle parking lots we saw. I heard that 35% of the Danes commute to work by bike. What a good idea. It was a lovely place filled with happy and fun-loving people.
Posted by Lori at 12:00 AM 6 comments: 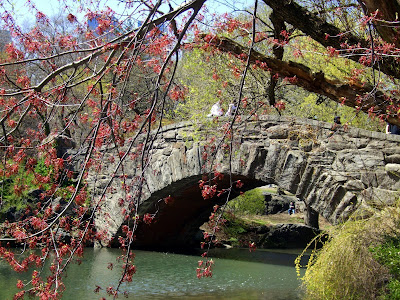 One of my favorite bridges in Central Park to end the week....I've shown this bridge so many times that I hope I haven't shown this shot before. Just getting back from my trip so I'll look forward to seeing your pictures next week. Have a great weekend!