The Ego and the Id 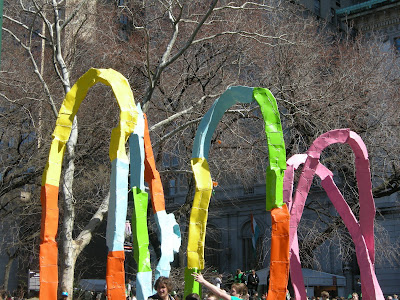 We need a splash of color after days of non-stop rain here. This is a work called The Ego and the Id by Franz West and is on display courtesy of the Public Art Fund at 60th Street and Fifth Avenue in Manhattan. There's a description and much better photos of it on their website here. 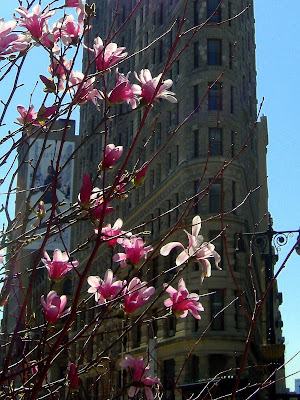 Some blossoming trees, magnolias I think, near the Flatiron building in Manhattan. This famous triangular shaped building is where 23rd Street Street, Fifth Avenue and Broadway converge (if that's the right word for it!). 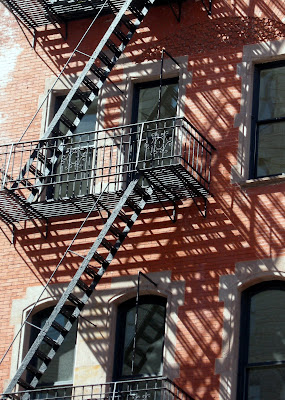 A random shot today of a typical fire escape from a New York City building. I believe this one was in Chelsea. The crisscrossing of the steps and the shadows caught my eye, though I didn't get a very good shot of it. Have a good week!
Posted by Lori at 12:00 AM 5 comments: 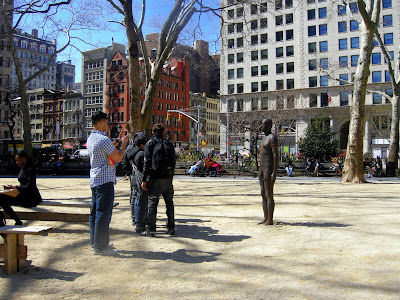 The statues from Antony Gormley's "Event Horizon" in and around Madison Square Park were capturing a lot of attention on the ground too. I believe it officially opens today. Enjoy your weekend! 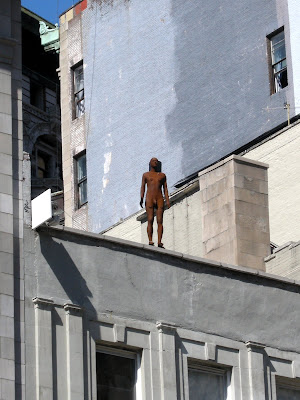 There's a new art installation in Madison Square Park and the works can also be found on the tops of buildings around the perimeter of the park. It's very surprising if you aren't expecting to look up and see a statue on top of a building! Called "Event Horizon" the exhibit is by the British artist Antony Gormley. You can read more about the exhibit at the website here. 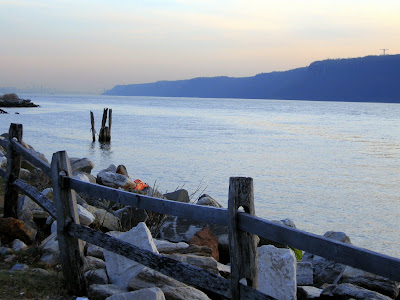 This is a view looking south along the Hudson river from MacEachron Park, which is in Hastings on Hudson, NY in Westchester County. If you squint really hard you can see the New York skyline and the George Washington Bridge way off in the distance. 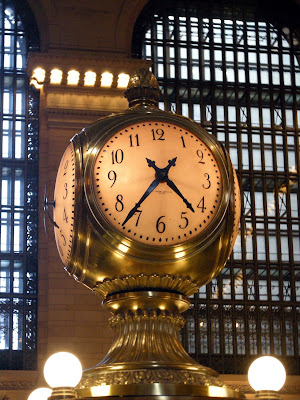 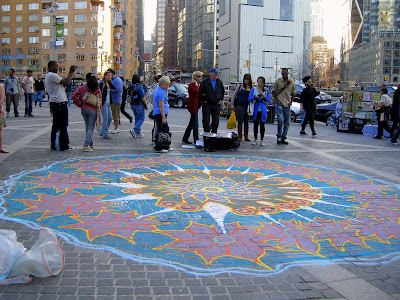 There's nothing like a beautiful spring weekend to bring out the street artists. I didn't see the artist who created this chalk design, but it was getting a lot of attention from passers by. Since today will be rainy I suppose it won't last long and his or her creation will wash away. It was a touch of spring while it lasted! Have a good week. 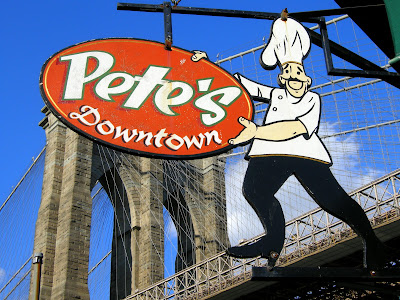 I'm not sure if Pete's Downtown is still there anymore. Actually it's not really downtown but in the Dumbo section of Brooklyn, near the Brooklyn Bridge. (I'm not sure if I've posted this one either as I'm digging into the archives now for pictures.) I haven't eaten there so I can't vouch for the food, they have a cute sign though. Have a great weekend! 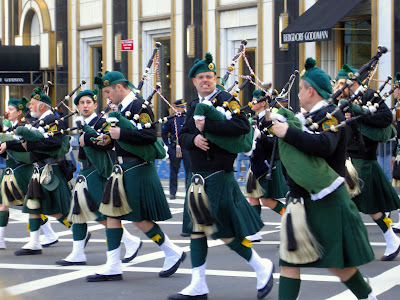 This is the bagpipe band from Manhattan College, a Catholic school in the Bronx. I took a walk at lunch yesterday and saw a bit of the St. Patrick's Day parade. I even saw a dog dyed green, but unfortunately didn't get a shot of him. 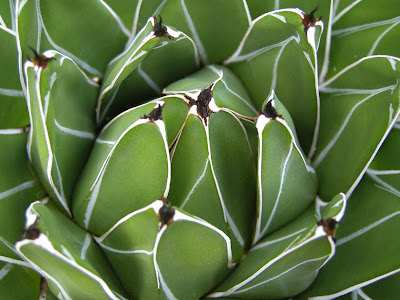 It's not a shamrock, but here is something green from the garden at Wave Hill to mark St. Patrick's day. (I'm afraid I can't identify what type of plant it is.) Enjoy your day! 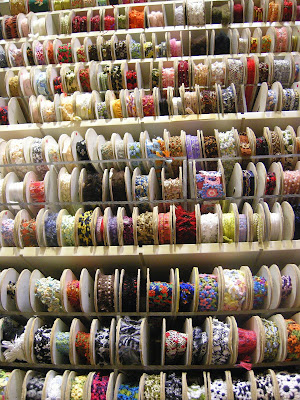 I stopped in a cool place yesterday, M&J Trimmings in the fashion district. It has every sort of lace, trimming, button, feathers and sequins you can imagine. What a fun store to browse. These are some of the trimmings. 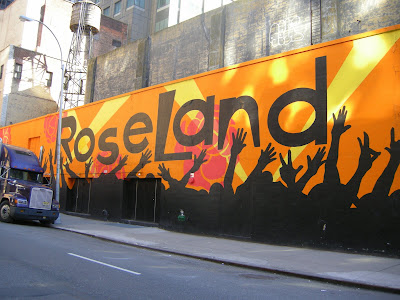 This colorful mural is for the Roseland Ballroom in midtown Manhattan. I've never been inside, but I believe it was quite the club in it's heyday. Maybe I'll check out the inside some day! 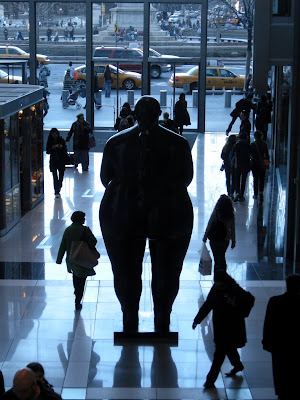 This is one of the statues by Fernando Botero in the lobby of the shops at Columbus Circle. There is a male statue on one side of the lobby and this female one on the other. They're very imposing looking when you view them while coming down the escalators. Enjoy your weekend! 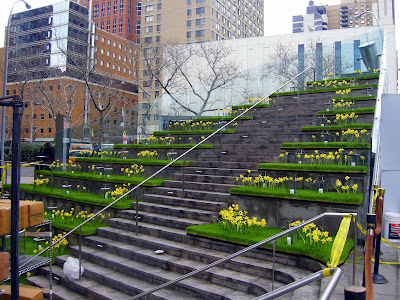 They had an event recently at Alice Tully Hall at Lincoln Center and the designers added daffodils and grass to the bleacher steps along Broadway. It was nice to see the flash of the yellow daffodils on that otherwise dreary day. Spring must be around the corner! 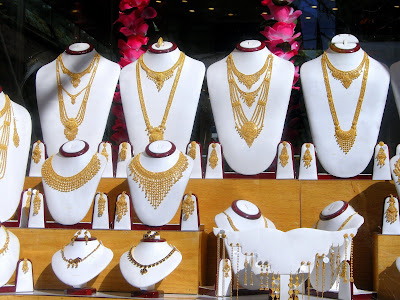 This is some of the beautiful gold jewelry on display at one of the many jewelry shops in Jackson Heights, Queens. The designs were so intricate and pretty. I loved window shopping there! 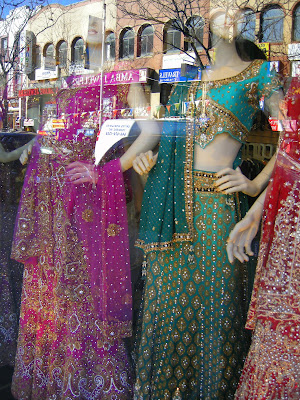 This is a photo of a sari shop in Jackson Heights, Queens. Jackson Heights is a diverse neighborhood with a big South Asian population and many wonderful restaurants and shops. It's a really fun place to stroll and look at the windows and also to have some delicious food! 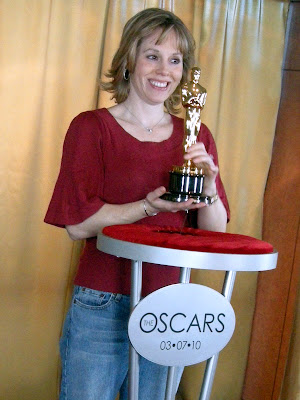 And the Oscar goes to...me! (Ha ha!) They had an Oscar exhibition at the shops at Columbus circle with Oscar memorabilia and related displays. Everyone could hold a real Oscar and get your photo taken with it. Silly I know, but it was fun! 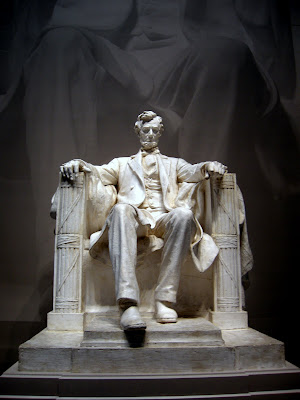 No, this isn't a photo of the Lincoln Memorial statue but is actually a plaster cast of the real thing. It's part of an exhibit at the National Gallery now called Designing the Lincoln Memorial. You can read more about it here. This year is the 200th anniversary of Lincoln's birth and this exhibit is centered on Daniel Chester French, the artist who created the famous statue and Henry Bacon, the architect of the memorial. I think I've exhausted all of my Washington pictures, so hopefully back to New York ones next week. Have a great weekend! 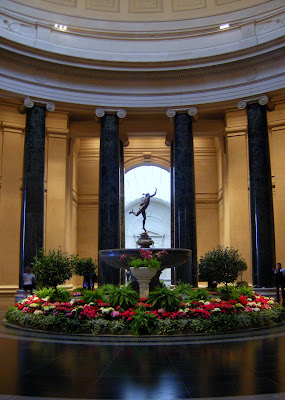 This is a photo from the courtyard in the West Building of the National Gallery of Art in Washington. I'm afraid I don't know anything about the fountain in the center. They have such an amazing collection of artworks there and I wish I could have have spent more time browsing through the museum. Too much to see in too short of time! 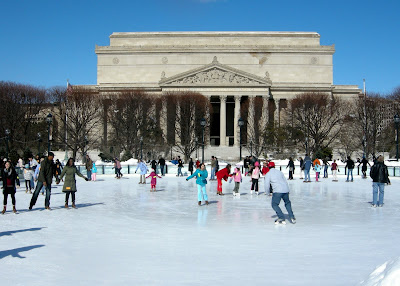 These skaters were enjoying some time on the ice in front of the National Archives. This is a rink they have each winter in the National Gallery of Art Sculpture Garden. It's a pretty nice setting for ice skating. Unfortunately, I didn't take a turn on the ice, next time! 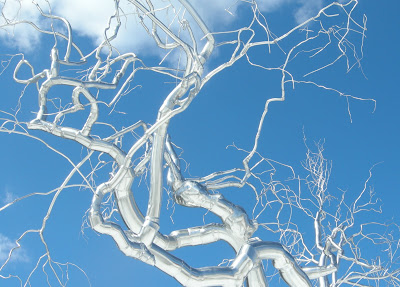 I've shown photos before of the works of the artist Roxy Paine. This is a sculpture of his called "Graft" and it's located in the Sculpture Park of the National Gallery of Art. (I showed one of his trees from the roof of the Metropolitan Museum of Art last summer and from a display in Madison Square Park in Manhattan a few years back.) This is an inside view of the clock tower from the Old Post Office Pavillion in Washington, DC. That's the building that I showed on Friday. I always think the inner workings of these are really neat. Enjoy your week.
Posted by Lori at 12:00 AM 6 comments: