Night at the Ballet 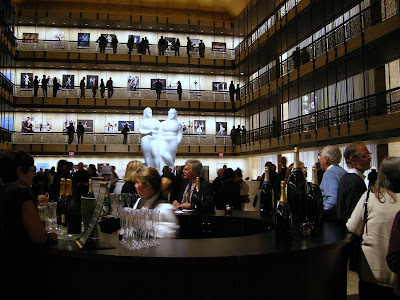 I had a real treat last night in getting to see a performance of the New York City Ballet at the Koch Theater at Lincoln Center. They performed some classics like Balanchine and some newer works as well. It was beautiful! This is the outer lobby of the theater. The statues in the middle of the photo are called the Circus Performers. The photographs on the wall at the back are an exhibit celebrating the 75th anniversary of the School of American Ballet.

Update: Not feeling well Friday so I didn't manage to post a picture today. But I'm sure I'll be back next week. Have a great weekend!
Posted by Lori at 12:00 AM 8 comments: 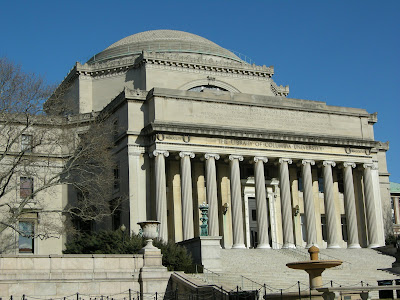 New York is home to many universities, one of the most well-known of which is Columbia University in the Morningside Heights section of Manhattan. This building, the Low Memorial Library, is probably one of the most recognizable on the campus. Here is some info from Wikipedia:

The Low Memorial Library is the administrative center of Columbia University. The steps leading to the library's columned facade are a popular hangout and meeting place for Columbia students, as well as home to Daniel Chester French's sculpture, Alma Mater, a university symbol that is the subject of many rumors. Low Library was officially named a New York City landmark in 1967, then a National Historic Landmark 20 years later. It is capped by the largest freestanding granite dome in the United States.
Posted by Lori at 12:00 AM 5 comments: 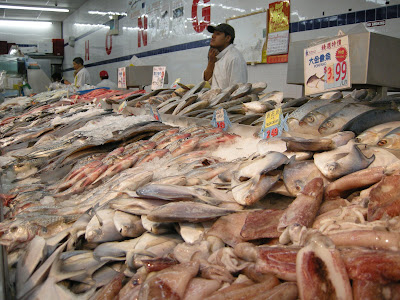 They had a sea of fish at the Hong Kong Supermarket in Flushing, Queens. I've never seen so many different types of fish for sale. They even had live eels, frogs and turtles. It was quite a sight! 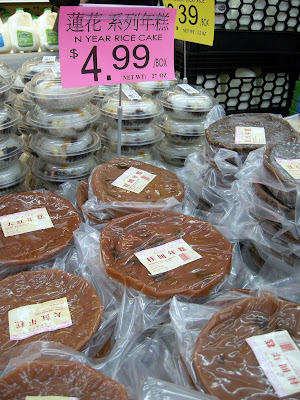 Since today is the first day of the lunar new year, I thought I'd show some traditional new year's cakes that I saw recently in the Hong Kong Supermarket in Flushing, Queens. These cakes are called Nian Gao in Chinese and they are a sticky rice cake that is usually eaten warm. I don't know much about the traditions of lunar new year, but I know there is usually a nice parade that happens here in Chinatown in Manhattan and in Flushing, where there is a big Asian community. If I get to one of the parades next weekend, I'll make sure to have some pictures!
Posted by Lori at 12:00 AM 6 comments: 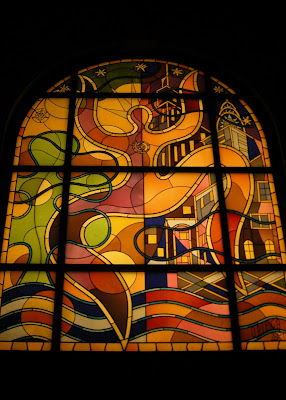 This stained glass window above the entrance to the Buckingham Hotel caught my eye recently. The Buckingham is on 57th Street, near Carnegie Hall and was apparently home to many singers and musicians in its day. It still looks pretty nice, if pricey. I wouldn't mind staying there some day. Enjoy your weekend. 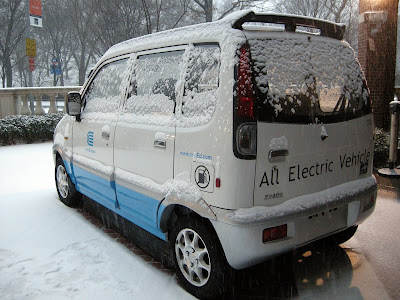 As part of its exhibit on the "Greening of NY" the Museum of the City of New York was showing this electric car, which is being integrated into Con Edison's fleet of cars. (Con Edison is our local electric company.) These cars get 30 to 40 miles on a fully charged battery, require no gas and produce no emissions directly. Plus they can be charged at a standard electrical outlet. I wish I had one! The only drawback is their maximum speed is 30 miles an hour, but still they are very cute! 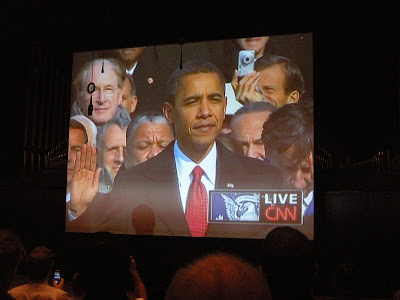 Yesterday was an exciting day at work as we got to watch the inauguration live. It's not often that we get to watch tv at work!! It was a very happy day! 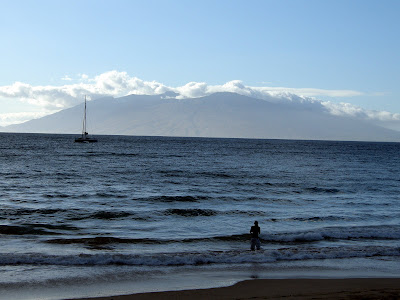 Since I don't have an appropriately patriotic photo for today's inauguration day, I am showing a photograph I took last summer in Barack Obama's beautiful home state of Hawaii. I am so excited for the festivities today and wish our new President much luck! 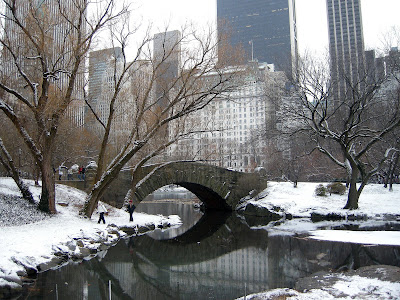 I've shown a photo of this Central Park Bridge in the summer time, so I thought I'd show you what it looks like in a wintry setting. I'm not sure if the bridge has a name. I tried to find it but couldn't come up with anything. If you have today off, I hope you enjoy it. (I have to work!)

Museum of the City of New York 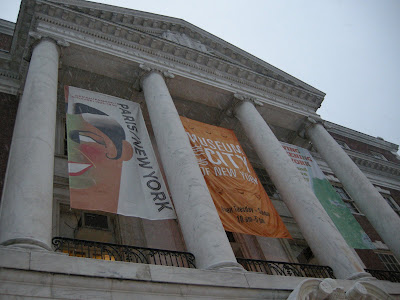 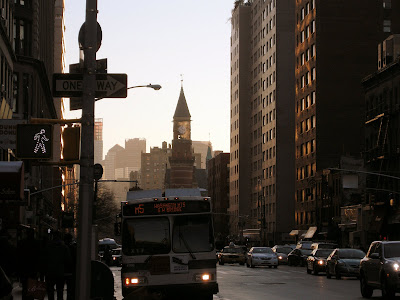 This is just a random street photo today. I took this looking south on 6th Avenue. The tower with the clock you see in the background is the Jefferson Market Courthouse, now a branch of the New York Public Library. 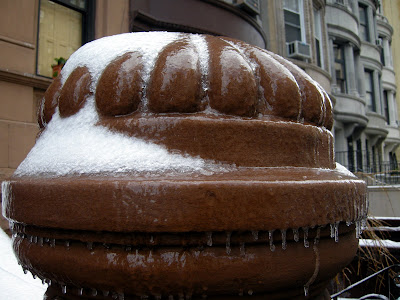 Super cold temperatures are predicted here for the rest of the week. Soon everything might be covered with ice like this post from a brownstone staircase that I passed recently. I don't know why, but it reminded me of a giant cake. Stay warm! 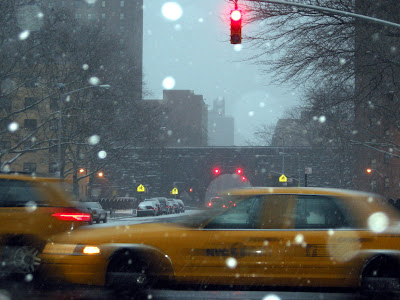 Nothing much to say about this one I'm afraid. This is a shot of some cabs going by in the snow last weekend. I always feel sorry for the cab drivers in bad weather. I guess they have to become experts in driving in the snow (and the traffic) though.

End of the Christmas Trees 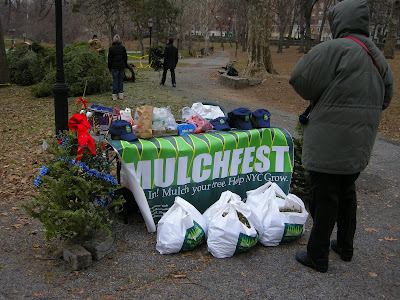 Saturday morning I happened across one of the mulchfest gathering spots. Mulchfest is a program where you can bring your christmas trees to be turned into mulch to be used in the city parks. You can see a big pile of them in the background of the photo. They had quite a lot. I've never taken my tree before, but I will next year! 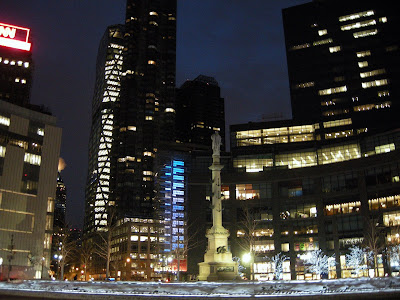 Running low on photos again.....this is a shot of Columbus Circle from last month. According to Wikipedia the monument at the center marks the spot where distances to and from New York City are measured. Columbus Circle was named for Christopher Columbus and is located at the intersection of Broadway, Central Park West, Central Park South (59th Street), and Eighth Avenue, at the southwest corner of Central Park. I'm hoping to take some photos this weekend. Have a good one!
Posted by Lori at 12:00 AM 9 comments: 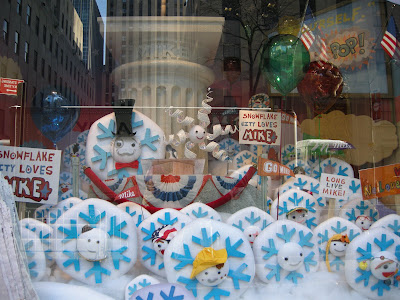 This is a photo from one of the holiday windows at Saks Fifth Avenue this year. This year's display was based on the children's book A Flake Like Mike by Mike Reiss, the Simpson's writer. I'm not sure what the story is about, but the windows were cute. 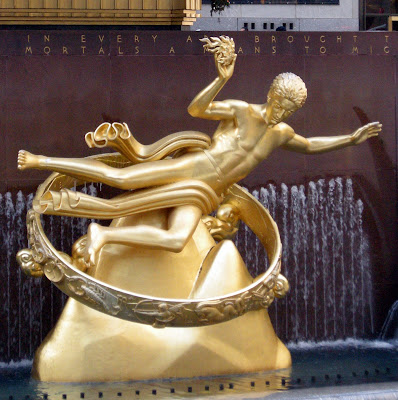 One of the most familiar sights at Rockefeller Center is Paul Manship's statue of the Greek legend of Prometheus bringing fire to man. The inscription above the statue says "Prometheus, teacher in every art, brought the fire that hath proved to mortals a means to mighty ends." I've never really looked at it up close before. Remember making paper garlands as a kid? Well I guess this store went crazy with them for their windows this Christmas. I wonder how long it took? I kind of like it! Enjoy your day. 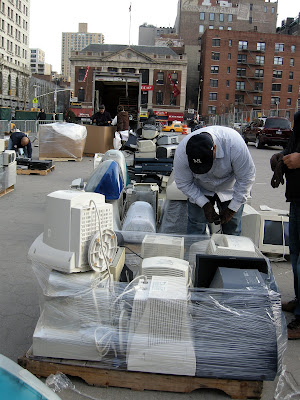 I didn't have time this weekend to go out and take some photos, but I did have time to take my old computer to the Lower East Side Ecology Center's pickup day for electronics recycling. That's very exciting, huh! Sorry not to have a more fun picture for today, but it was nice to see everyone bringing in their old stuff to be recycled. And to think I was tempted to put it in the trash! 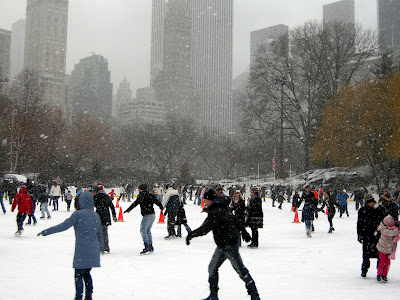 Sorry for two ice skating photos in one week. This time I was actually on the ice. It was fun to skate yesterday in Central Park, but it was awfully cold! Enjoy your weekend and see you Monday. 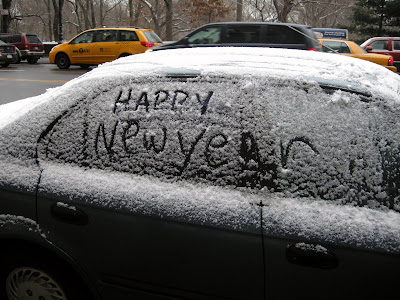 I passed this car with a new year's message this afternoon and decided to us it as my post. I wish you all the best things for the year ahead. May 2009 be good to us all. Happy New Year!