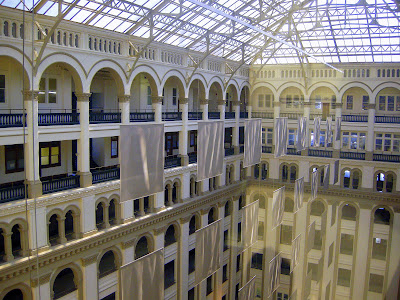 This is the inside of the Old Post Office Pavillion in Washington. It's mostly a food court inside these days, but from the roof you have some of the most beautiful views of the city and its monuments. 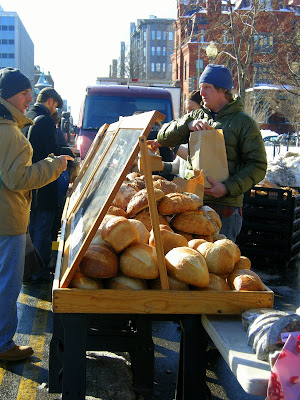 They were selling some delicious looking bread at the farmer's market in Dupont Circle in Washington. I love farmer's markets and this one was great. The poor vendors looked like they were freezing in the cold weather though! 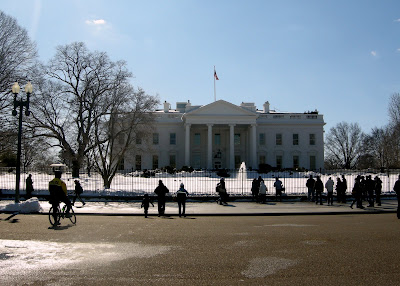 I've got no New York photos right now, so I'll continue on with a few more from Washington. Here I am at the White House. I was invited in for dinner. (just kidding!) It looked pretty in the snow. 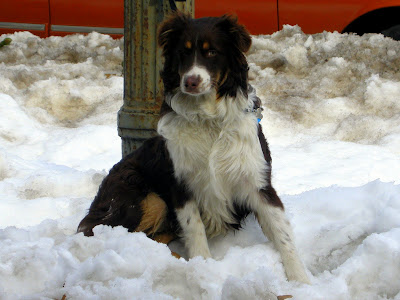 This little guy was enjoying the big snow in Washington and was getting a lot of attention from the passers by. I think he was happy when his owner came out of the store and rescued him from all the attention! 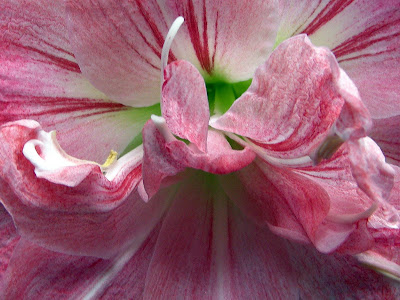 This was one of my favorite flowers from the National Botanic Garden. It had such a beautiful mottled pink and white color. I couldn't resist trying to get a close-up shot. 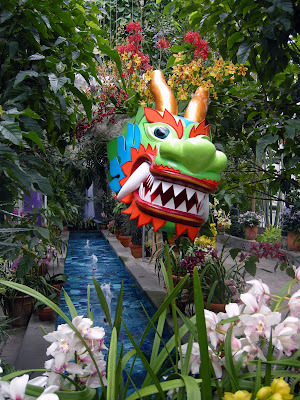 The United States Botanic Garden in Washington is quite beautiful, especially this time of year when they feature their orchids. This dragon is in celebration of the lunar new year which started last weekend. Have a great weekend! 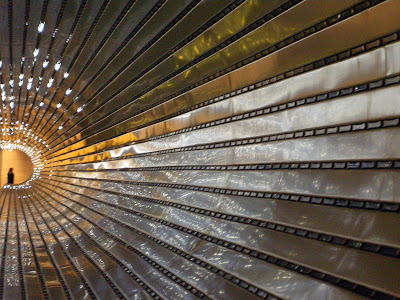 This is the tunnel that links the west building of the National Gallery of Art in Washginton with the east building. Both buildings are filled with treasures and you could spend hours there. 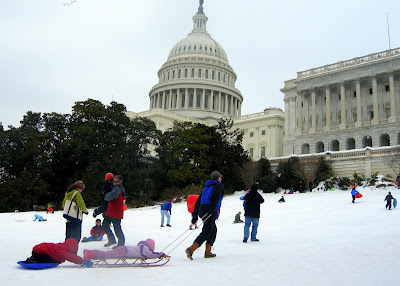 Washington had a super big snow storm last week and they were letting people to sled ride on the lawn of the capitol building. We heard that this was the first they had officially allowed people to do this in many years. 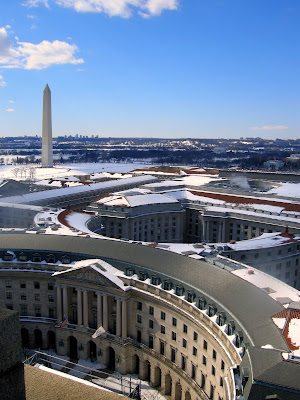 I was lucky to spend the past weekend enjoying the sights in Washington, DC. It's such a beautiful city, especially in the snow. This photo was taken from the top of the Old Post Office Building. 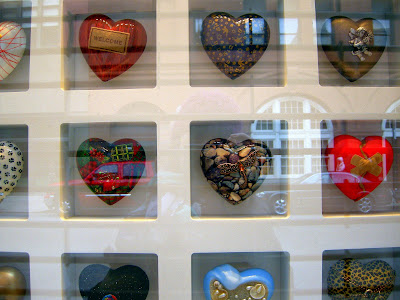 In advance of Valentine's day this weekend, I wish you all a sweet one! These are some hearts I saw in a store window at Heartart creations in Chelsea. I'll be away on Monday so have a good weekend and see you Tuesday! 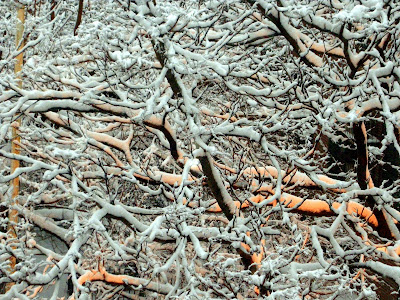 We had the day off from work yesterday (a very rare snow day!) and since I didn't leave my house I had to show you a photo from my window. The snow was really beautiful and it was nice to enjoy it from inside! 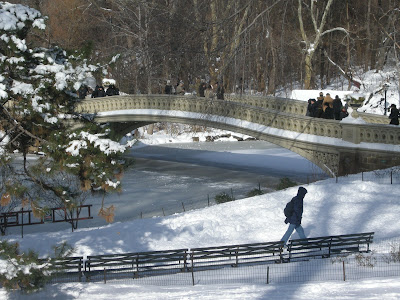 I just read in the magazine Crain's New York that "the Bow Bridge in Central Park has been declared the most romantic spot in Central Park, according to a survey conducted by Central Park Conservancy. Throughout the month of January, more than 1,000 people voted on the agency's Web site, recounting their own romantic moment at the spot. The Bow Bridge - built in 1862, making it the second-oldest cast-iron bridge in the U.S. - won out over other popular park spots such as Belvedere Castle, Bethesda Terrace and the Conservatory Garden." 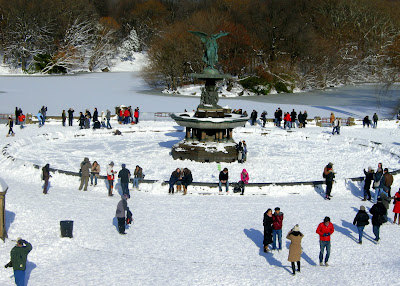 The last big storm missed us completely and Washington, DC got all of our snow! This photo of the Bethesda Fountain in Central Park was taken after the first snow this winter in December. We are expecting a big storm this week and I can't wait! 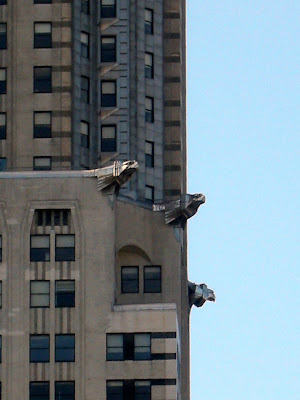 I love all of the details in the Chrysler building in midtown Manhattan. I wish I could get a look at these adornments up close. This photo was the best I could do! 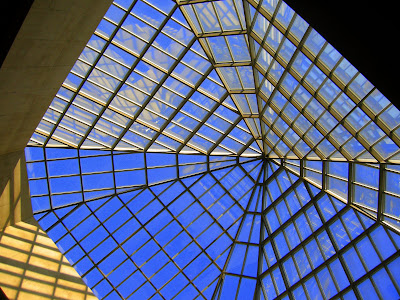 One of the glass ceilings in an atrium at the Metropolitan Museum of Art. I've exhausted all of my photos in the archives, so hopefully I'll find something fun to photograph over the weekend. Have a good one! 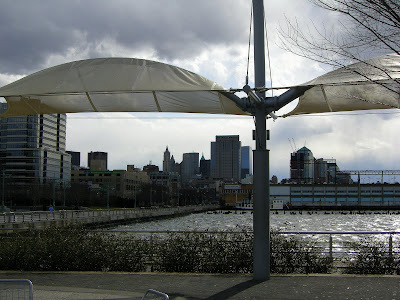 This is one of the piers that juts out into the Hudson River as part of the park that runs along the river. This was taken a few years ago on a gloomy day. 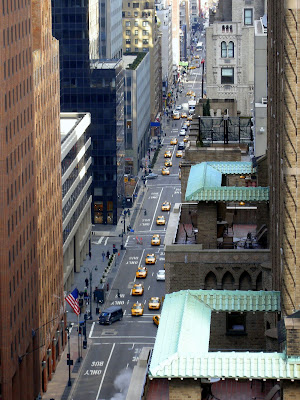 A line of taxis heads up this street one morning in Midtown Manhattan. Luckily I had a bird's-eye view. Not sure which street this was, perhaps Lexington Avenue. Have a good Wednesday. 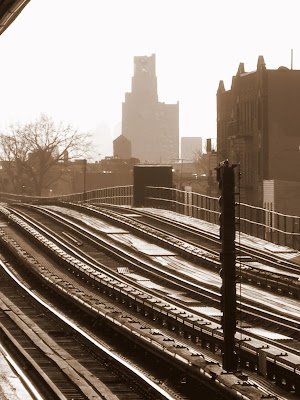 Despite it being called the subway, I just read the approximately 40% of the tracks in the New York City subway system are actually above ground. These are some elevated tracks in Queens. On these cold days, I'm glad my subway station is under ground! 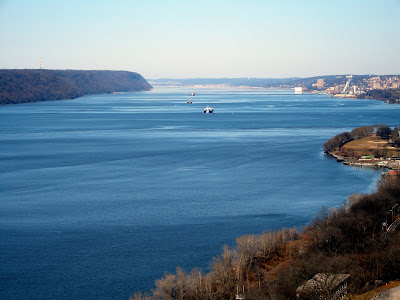 To start the week, a view of the Hudson River flowing between upper Manhattan on the right and New Jersey on the left. This shot was taken from the Manhattan neighborhood of Washington Heights. Have a good week.